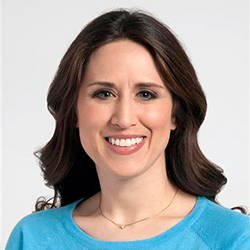 Kristin Kirkpatrick is the President of KAK, Consulting, LLC and a dietitian and consultant of Wellness Nutrition Services at the Cleveland Clinic Wellness Institute in Cleveland, Ohio. She is a best-selling au- thor, an experienced presenter, and an award winning Dietitian. Kristin has been seen on both local and national shows such as the TODAY show, NBC Nightly News and the Dr. Oz show and has contributed to several national Newspapers and magazines such as The New York Times, Wall Street Journal, TIME, Runners World, Oprah, Martha Stewart Living, Food Network, Costco Connection, Self and Women’s Health. The Huf ngton Post named Kristin “one of 35 diet and nutrition experts you need to follow on twitter.” In December, 2017, Kristin’s show “The New Rules of Food” aired nationally on PBS and received rave reviews.

Kristin’s career began in Washington, D.C. where she assisted in lobbying efforts for Medical Nutrition Therapy reform on behalf of the American Dietetic Association Policy and Advocacy group. She then went on to become the Regional Coordinator of the Montgomery County, Maryland Hearts N Parks program. During her time with Hearts N Parks, she designed, implemented and measured health pro- motion programs within the Washington, D.C. metro area. Kristin then returned to Ohio to work for the Cleveland Clinic’s Department of Cardiovascular Genetics. She eventually became the lead Dietitian in the Cleveland Clinic Wellness Institute.

Kristin is a sought after national speaker on a variety of nutrition and wellness related topics. In addition, Kirkpatrick writes for TODAY.com, the Huf ngton Post, US News and World Report and is a featured ex- pert on Cleveland Clinic’s Health Essentials. Kristin also serves on Dr. Oz’s Medical Advisory Board as well as the Advisory Board for Lose it!

Kristin has over 18 years of experience in the health management area, holds an MS in Health Promotion Management from American University in Washington, D.C., and a BA in Political Science from The George Washington University in Washington, D.C. She is licensed as a Registered Dietitian in the state of Ohio. In May 2012, Kristin received the Ohio Outstanding Dietetic Educator of the year award and, in 2013, received alumni of the year from her high school, Gilmour Academy.

In January 2017, Kristin published her rst book, Skinny Liver: A Proven Program to Prevent and Reverse the New Silent Epidemic—Fatty Liver Disease. You can read an except here.

In her free time, Kristin enjoys running, hiking, skiing, reading, and spending time with her husband Andy, her 2 sons Jake and Boden and their dogs in their home outside of Denver, Colorado..